Phenobarbital at least where I work has been first line treatment for seizure control for as long as I can recall. We dabbled with using phenytoin and fos-phenytoin in the past but the go to tried and true has been phenobarbital for some time. The use of this drug though has not been without trepidation. Animal studies have linked phenobarbital to increases rates of cerebral apoptosis. Additionally, in a retrospective comparison of outcomes between seizures controlled with phenobarbital vs Levetiracetam, the latter came out ahead in terms of better long term developmental outcomes. This study from 2013 was entitled Adverse neurodevelopmental outcomes after exposure to phenobarbital and levetiracetam for the treatment of neonatal seizures. Purists of course would argue the need for a prospective trial and that is what we have to chat about here.

The study in question was a multicenter randomized phase IIb trial (searches for a dose that provides biological activity with the minimal side effect profile) that compared two doses 40 mg/kg and 60 mg/kg of Levetiracetam with standard doses of phenobarbital. The study was done by Sharpe C et al and called Levetiracetam Versus Phenobarbital for Neonatal Seizures: A Randomized Controlled Trial.

In this study patients were randomized to receive levetiracetam or control phenobarbital treatment group in a 60:40 allocation ratio by using a block randomization strategy and stratified by site. The trial design is shown in the diagram below. 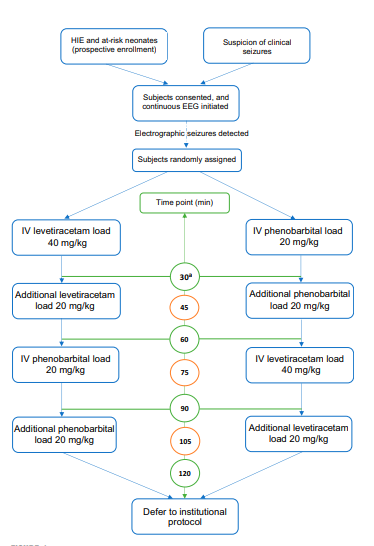 The study was designed to not delay institution of the accepted treatement with phenobarbital as usual first line treatment of seizures by more than 1 hour. The strength of this study was that the authors used electrographic seizures confirmed by continuous EEG monitoring. The efficacy of medication effect was blindly interpretted by two independent electrophysiologists. in other words the authors went out of their way to ensure these were real seizures and moreover that any changes to medications were decided upon after interpretation of effect by people remote from the study. The primary outcome though in comparison to the aforementioned retrospective study was a short one. In this study the primary outcome was initialy absense of seizures for 48 hours but then was changed part way through the study to 24 hours. The change was a practical one since it was noted after data collection that in many cases EEG monitoring had been stopped prior to 48 hours.

Honestly it is the results that led me to want to talk about this study. They are the exact opposite of what i thought they would be. Based on my own experience with Levitiracetam seeming like a wonder drug when it comes to seizure control I expected the results to favour it. Not the case.

To say that phenobarbital crushed the competition is an udnerstatement. Having said that the incidence of side effects were higher with phenobarbital as well. Hypotension, respiratory suppression, sedation, and requirement for pressor support, were more common. Nonetheless, this study also included patients with HIE and found even in this subgroup phenobarbital was superior. This is important information as one could speculate that earlier seizure cessation in those with anoxic injury already could be especially beneficial.

What do we do with these results?

As the authors point out this is a study of short term outcomes. In the trial about long term outcome it was clear that treatment with phenobarbital leads to worse outcome than with levitiracetam. Having said that it was a retrospective study so the next step will be to conduct long term outcome studies to see effects. This presents the possibility of an interesting conundrum. What if the newer drug is inferior to tried and true phenobarbital at controlling seizures but leads to better long term outcome? Would you consider allowing seizures to persist longer than you might otherwise want to in the short term but then be able to reassure families that the long term outlook is bettter? The side effect profile of levitiracetam is such that I think neurologists want to use it but the other possibility is that there is another newer anticonvulsant that will need to be tested as wouldn’t it be great not to have to choose either poor acute seizure control but better long term outcome vs better seizure control with concerning long term outcome? As a parent I have no doubt watching a child eize would be terrifying and you would want it to end as soon as possible but the question with phenobarbital is at what cost?