Intubate-Surfactant- Extubate or INSURE has been around for awhile. The concept is to place an ETT while an infant is first on CPAP and then after pushing surfactant in quickly remove the ETT and put back on CPAP. This does not always go as planned though. If after surfactant the FiO2 remains above 30% many people would keep the ETT in place as they would surmise that the infant would fail if the tube was removed. They would probably be right.

Sustained inflations have fallen out of favour ever since the SAIL trial results were published and written about here . Having said that, the concept of using sustained inflation is to open the lung and expand closed alveoli to improve both oxygenation and gas exchange. Much like giving inhale nitric oxide to a collapsed lung is unlikely to make much difference, the question could be asked whether giving surfactant to a lung that is most collapsed will fail to deliver this compliance improving medication to the areas of the lung that most sorely need it. Our Italian colleagues therefore decided to undertake a study to look at providing surfactant to lungs after a recruitment manouver and see if this made a difference to the meaningful outcome of extubation failure after surfactant provision. The results are intriguing and as such here we go in looking at the study.

The trial is the Lung recruitment before surfactant administration in extremely preterm neonates with respiratory distress syndrome (IN-REC-SUR-E): a randomised, unblinded, controlled trial and involved 35 NICUs in Italy. All infants enrolled were born from 24 + 0 weeks to 27 6/7 weeks gestational age at birth and all < 24 hours of age at enrollment. Each baby had to be on CPAP at the time of randomization and meet prespecified failure criteria of FiO2 of 0·30 or greater for target SpO2 of 87% to 94% for at least 30 min or in 10 Infants for rapid deterioration of clinical status or if pCO2 was > 65 mm Hg with a pH less than 7·20. Regardless of which arm they were randomized to all infants received 1-2 sustained inflation breaths using 25 cm H2O for 10-15 secs using a t-piece resuscitator after being started on CPAP as was the practice at the time. After randomization which could not be blinded, patients were then either given surfactant via INSURE without any further strategy for opening the lung or received the IN-REC-SUR-E approach. The latter involved putting the infant on high frequency oscillation starting with settings of mean airway pressure 8 cm H2O; frequency 15 Hz; ΔP15 cm H2O; and inspiration to expiration ratio of 1:2. Using this modality infants underwent stepwise recruitment methods prior to administering surfactant (poractant). The primary outome was the need for mechanical ventilation within the first 72 h of life. Infants met the primary outcome if they were not extubated within
30 min after surfactant administration or required reintubation before 72 h of life. 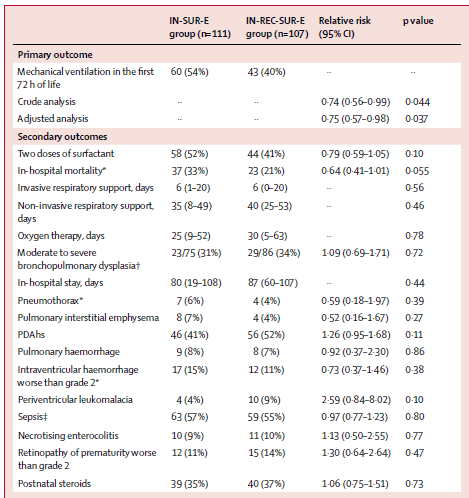 Based on a power calculation the authors needed 103 infants in each arm and they recruited 107 in the treatment and 111 in the control arm. In the per-protcol allocation 101 received the treatment and 111 the contol. While the strategies for extubation were not set out to be equal (units were allowed to extubate to anywhere from +6 to +8 for pressure levels), the groups were not different 7·0 cm H2O, SD 0·4 for the experimental group and control arms. Given the steps taken to open the lung in the lung recruitment arm, the FiO2 was lower at 28% prior to surfactant provision in the treatment group than in the usual INSURE approach at 42% prior to surfactant provision. All infants were extubated within 30 minutes of receiving surfactant. As the results demonstrate, whether there was an intention to treat analysis or per-protocol analysis the babies who received the intervention were more likely to remain extubated. The number needed to treat was 7 which is a pretty powerful measure. Interestingly, looking at secondary outcomes there are some interesting trends as well including less mortality which on a per-protocol analysis was significant but also a trend towards more PVL at 9% in the treatment arm and 4% in the control. The mean times to surfactant administration were 4 hours in the treatment group and 3 hours in the control but the high frequency manoeuvre had a mean duration of only 30 minutes. It is possible that the use of high frequency could have blown off CO2 to very low levels but I am uncertain if the short reduction in pCO2 could have contributed significantly to reduced cerebral perfusion if that trend is representative of something. Interestingly, pneumothroaces were not different between groups as no doubt as a reader you might wonder if use of high pressures to recruit the lungs when they are non compliant might have led to air leaks.

So it worked, now what?


First of all, the results to me make a lot of sense. Opening the lung before delivering surfactant and then seeing better chances of staying extubated doesn’t really surprise me. Some questions that come up now for me would be how this strategy would fare in those who are older at birth. I suspect given the greater chest wall support and lower likelihood of severe RDS this strategy might be even more effective at reducing FiO2 or perhaps CPAP need in terms of duration after extubation. I would think it unlikely to make a difference in reintubation though as most would remain extubated regardless. That is for another study though with a different outcome.

There will be centres that don’t like the use of HFOV for recruitment so what other strategies could be used in lieu of this? I hate to say it but there will also be calls to have a much larger study specifically designed to look at the secondary outcomes. Would a larger study find a significant increase in PVL or demonstrate that it was just a random finding? Might mortality be proven to be lower and even more so?

Regardless of the above what I think this paper does is give us reason to pause before giving INSURE and ask ourselves if we have done what we can to open the lung after intubating before rushing to squirt the surfactant in. Maybe increasing the provided PEEP and lowering the FiO2 somewhat before giving surfactant will help with distribution and increase your chances of first being able to extubate and secondly when you do keeping the tube out!