Precision medicine is a growing field in which genetic factors, environment, metabolism and even lifestyle are taken into account when deciding who should receive a treatment or not. When it comes to bronchopulmonary dysplasia I believe anyone who works in Neonatal care can attest it is a mystery why some infants go on to develop BPD while others don’t. We do know that certain treatment strategies may increase risk such as using excessive volumes or pressure to ventilate and in the last 25 years the notion that your level of cortisol in the blood may make a difference as well. I have written about prophylactic hydrocortisone use before in Hydrocortisone after birth may benefit the smallest preemies the most! When looking at the literature thus far and taking into account the results of the individual patient meta-analysis the following table can be generated highlighting a summary of benefits.

The question thus becomes if there is benefit for some infants under 26 weeks and then for some that are 26 and 27 weeks but there is also risk of harm, is there a way to select out those who are most likely to benefit with the least risk of harm.

A baby’s initial cortisol level may be the answer

The PREMILOC study was a double-blond multicentred trial of 523 infants randomly assigned to either prophylactic hydrocortisone in the first 24 hours of life or placebo. All infants were under 28 weeks at birth and received 1 mg/kg/d of hydrocortisone 1 mg/kg/d for 7 days followed by 3 days of 0.5 mg/kg/d for three days. In a pre-planned study coming out of the PREMILOC study, researchers looked at the role of baseline cortisol in predicting response to treatment or risk of adverse outcomes.

What they found in examining baseline levels for both treatment and placebo groups was that a relationship exists between the baseline level and such outcomes.

From Table 4 they found a relationship between survival without BPD and a higher initial level of cortisol but found no such relationship in the treatment arm. The threshold of what was considered high was 880 nmol/L although the mean cortisol was in the 400-500 nmol/L range. in other words, if having adequate physiologic levels of cortisol is the goal and a baby already has that, giving more non-antiinflammatory dosing of hydrocortisone doesn’t yield benefit. 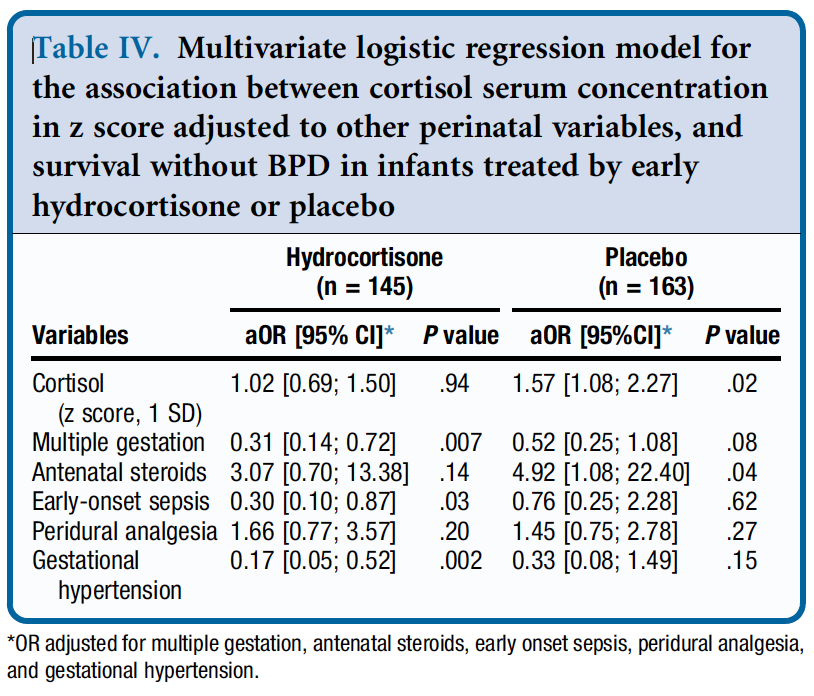 Similarly, when looking at side effects a positive correlation was found between higher baseline levels of cortisol and risk of grade III/IV IVH and spontaneous intestinal perforation. It would seem therefore that if a baby has the level of cortisol that they would normally have from a physiologic perspective they are no different than a placebo arm patient when given hydrocortisone as you bring them to where they need to be. When you double the dose however that they should have, side effects begin to rear their ugly head. 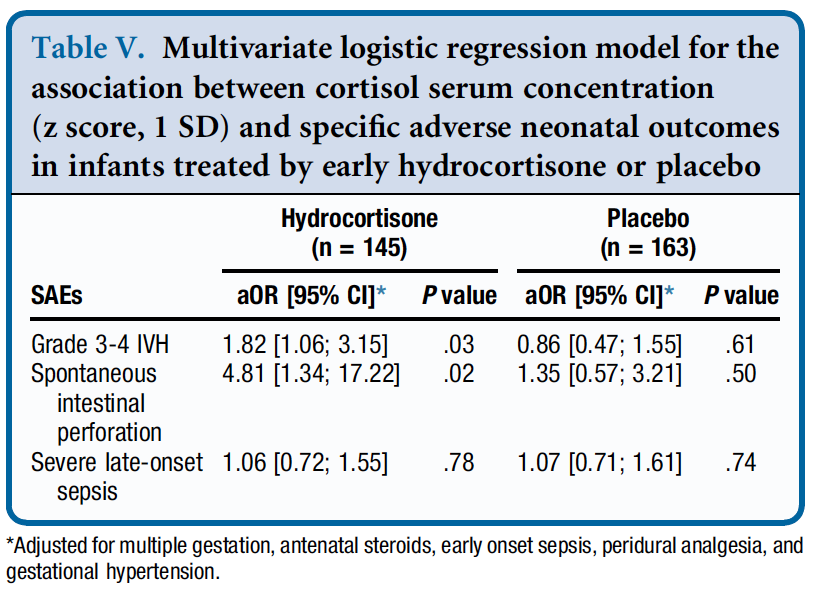 How can you use this information?

From personal conversations I know that many centres are struggling with what to do about giving hydrocortisone. On the one hand there isn’t much benefit (if at all) for BPD in the 24 and 25 week infants but they do better from a neurodevelopmental standpoint. On the other hand there is a benefit in the 26 and 27 week infants but you may predispose them to side effects as well.

This is where precision medicine comes in. One option for centers unsure of who to provide this to (if at all) could be to use a threshold of 880 nmol/L and if the initial level is above this you would not treat but if below offer treatment. This level while found in the study to be predictive of side effects in particular if high does seem very high to me. I would think most babies would qualify which is not necessarily a bad thing but in our center we have typically used levels above 400 or 500 as an adequate stress response. Regardless of the level picked one would be using physiologic data to determine who to give hydrocortisone to as a way to try and maximize benefit and minimize harm for the individual patient.

Make no mistake. Regardless of whether you decide to try this for your patients I don’t believe this is a magic bullet. The best chances for our patients come from having bundles of evidence based based practices and applying them to the patient population if we hope to reduce BPD and minimize risk from any side effects of our treatments. The question is whether prophylactic hydrocortisone should be part of this bundle.

What do you think?